Berlin has stolen my heart. A beautiful city filled with beautiful places. I was completely stunned from the minute we arrived and I knew instantly that I would be back some day. I am forever thankful to my friend victor’s mom and sister, amanda, for inviting us into their home and making us feel so welcome in Berlin. We were so lucky to have them there to show us around.
Thursday, amanda took us to the Berlin Wall at east side gallery to look at all of the artwork that covers the wall. In 1989 the wall fell, and in 1990 the artists started painting the wall. It was so beautiful and full of emotions. From a meditating Buddha to a group of men in gas masks, each section of the wall told its own story 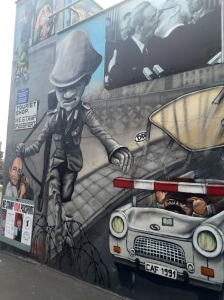 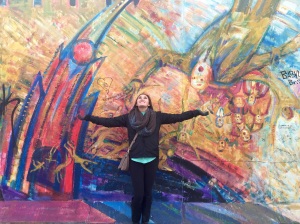 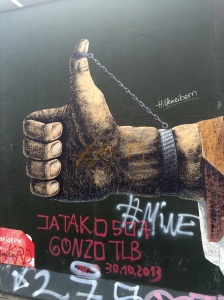 Thankfully the euro is much closer to the American dollar.. So we could rest easy knowing we weren’t spending double our money like in the United Kingdom.
After the Berlin Wall, we headed to Checkpoint Charlie, the allied forces checkpoint in Berlin after Germany surrendered. This mainly American checkpoint served to look after this side of Berlin and look over the wall during the soviets control over east Berlin. We learned that the American soldiers were not allowed to help east Berlin people in their escapes, and once had to sit still while they watched a man halfway over the wall lay there bleeding out while the soviet soldiers in east Berlin took their time to help them. American soldiers still stand at checkpoint Charlie.. For tourism of course. 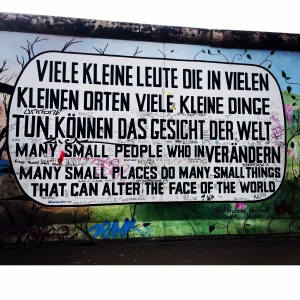 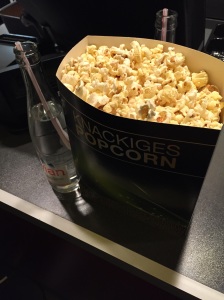 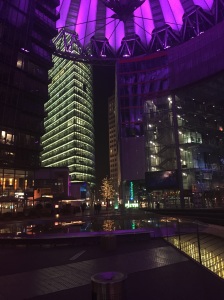 Popcorn and a drink at the movie theater we went to.. The ceiling of the theater was beautiful 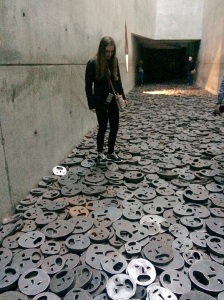 Jewish museum… Faces of a thousand Jewish lives lost during the holocaust. A little dent in the amount who were lost

Thankfully Amanda was around to help us navigate the public transportation our first two days.. Enough so we could get the hang of it and attempt it ourselves. What an amazing system of public transportation they have. If it was that easy in America, no one would even own cars.
So on Friday we went to the Jewish museum in Berlin. Admission was only three euros and it was amazing there. We stayed in that museum for almost three hours. I have to say I skimmed through the parts about Judaism since I’ve taken classes about the major world religions, and if I hadn’t it would have been a 4 or 5 hour tour. It was insane to learn how early the anti-semantic movement began and how early it was taken seriously in Germany specifically.

Overall I loved Berlin! I can’t wait to go back to Germany to Munich with my mom!

It was such a beautiful day when we went to Stonehenge in Salisbury, England. I couldn’t believe the history behind this structure, and after a childhood full of using computers with Stonehenge as the desktop background I couldn’t believe I was seeing it in person. We learned so much about the history of these stones and how important they were to so many groups of people. It’s crazy to think multiple groups of people thought this site was so important and worshipped this area of land. There were mounds of land used as burial pits thousands of years ago that dotted the valley we were in and directional areas pointing towards the river. 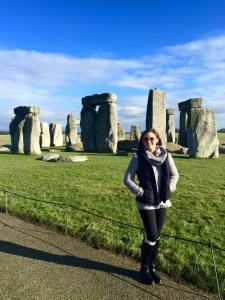 After a 10+ hour bus ride from Cardiff to Scotland, we finally arrived early Friday morning to Edinburgh (Pronounced Edinburough) and waltzed down Princes Street while marveling at the glorious castle to our left and the fine shopping to our right. The city had just woken up and it was breathtaking. We stopped in a little pub for breakfast (they don’t know what egg whites are here) and walked down the street to our townhouse. 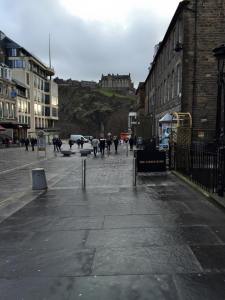 (Our view of the castle from our street)

We then headed to Waverly Bridge to start our on-off-tour of the city. We traveled first through some of New Town to the castle Queen Elizabeth stays in while she visits Scotland. She is smart and comes in June or July to avoid the freezing cold weather – still no snow though.

(View of Princes Street from the castle)

On a walking tour with a very Scottish man, we were introduced to some of the history of Edinburgh, such as the man behind the story of Jekyll and Hyde, the public hangings that used to happen in Grassmarket, and of course… the history behind the Edinburgh Mackenzie Poltergeist and the “body snatchers” who dug up bodies to provide cadavers for Edinburgh’s medical program.

(Where we met the Mackenzie Poltergiest)

One of the most unsettling experiences of my life, I was convinced I saw a man standing in the tomb we were standing in.. I almost asked our guide to shine her flashlight so I could make sure no one was there. I felt like I was going to pass out and couldn’t tell if my knees were buckling because of the cold or because of the fear! Sydney and Kait weren’t phased at all though! They have had countless people pass out or walk away with bruises, burns, and scrapes from the Poltergeist.

All in all, this trip was so exhausting but so fantastic and worth the long traveling days. I also had the best margarita of my life in Scotland so… I guess it is true that they know how to make a drink in Scotland. I hope I go back one day.

On Friday we went to the Roman Baths in Bath, England…

It was a surprisingly short train ride from Cardiff, only around an hour to get to Bath after stopping at one Bristol, England train stop. Trains seem to be very popular here and are very comfortable to travel long distances in.

Bath was beautiful, I have never been to a city with so much history. Romans lived in Bath during the first century around 50 AD and built the bath in a valley. Centuries of coins were found in the bath and the history of the people who lived there unfolded. Ruins and complete pipelines/architecture were excavated and were all shown throughout the tour of the interior.

(View of the Roman Baths) 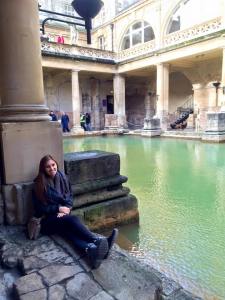 (One of the internal drain pipes)

(Outside the Roman Church)

After leaving the roman baths, we went to lunch and then to the Thermae Spa where we went to the pools at Thermae that are heated by the only natural hot springs in the UK. We weren’t allowed to take pictures so I have some from the website. The water was around 95 degrees fahrenheit.

(Secret picture we took in the locker rooms)

Thursday we leave for Scotland!

We started our first day of classes today, each class seems great, one of our teachers even told us to avoid going to his class so that we could travel… I’ll probably go anyway since it seems so interesting but it’s nice to have the option! Kait and I are taking Espionage and Oppression during the Cold War, Conflict Crisis and Change, Crime Vice and Lowlife in the 19th Century, and Riots Protests and Public Disorder.

Sunday we decided to take a trip to Cardiff to explore the Cardiff Castle among other sights of the city. It is only a 15-20 minute train ride from Treforest to Cardiff Central so it is a very easy trip. The streets are all beautiful and it is so much fun to walk around since there is so much to look at. 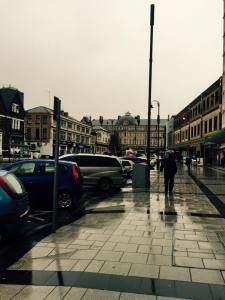 After stopping in Starbucks for coffee and free Wifi, we headed down St. Mary’s Street to the Cardiff Castle. 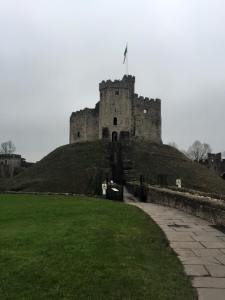 This castle was first built out of wood by Romans in 75 AD by Emperor Nero. They continuously added on to the castle by adding a stone wall fortress around the base. After the Romans left Wales, the Castle then belonged to The Normans 1091-1216AD consisting of the “Lord of Glamorgan” who added a moat and rebuilt the castle out of stone.

The full history of the Castle can be found here – http://www.cardiffcastle.com/history/ – 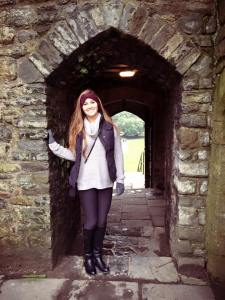 (Front gate of the Castle) 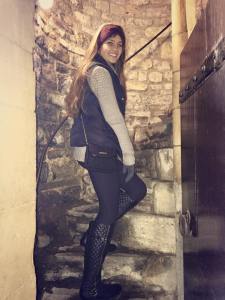 (Winding staircase to the top of the fortress) 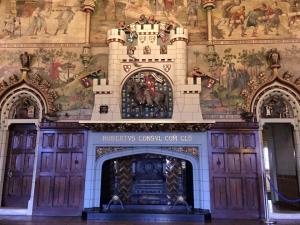 (Beautiful detail in every part of the house – The Great Hall)

There were also walls that surrounded the Castle and House and were used during World War 2 as bomb shelters for the people in Cardiff, holding hundreds of people.

On Wednesday Sydney and I went back to Cardiff because she needed some things from the store, we did a little sight-seeing while we were there! 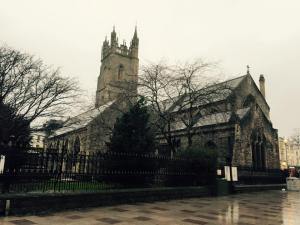 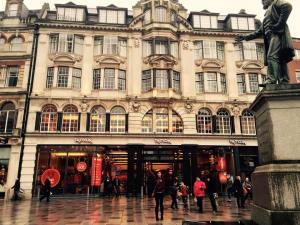 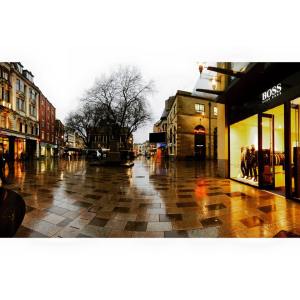 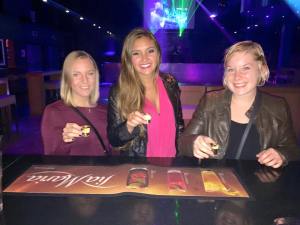 Of course our Uni has a nightclub in the Student’s Union and a Pub on campus… we had to check it out! I was surprised by all of the American songs that were played throughout the night. People understand us even less in a noisy club.. surprise surprise, at least we understand each other.

Tomorrow we head to the Roman Baths and venture to the Penarth Pier, a victorian pier, later this weekend, it is 50 degrees (fahrenheit) and after walking up all of these stairs to my room I am going to be in fantastic shape soon!

After a very long two days of traveling, I am finally here! Sitting in my room watching netflix, it is raining, something I will get used to very fast here in Wales. Yesterday was definitely the longest day of my life, literally I was awake and traveling from 3pm Thursday when I left Pittsburgh until 3pm Friday when I finally arrived at the University. With two time changes, two fights, a bus, and a train, we finally made it. Our rooms are nice and have private bathrooms attached to them, our flat consists of 6 rooms that remind me of American dorms, all connected by a hallway that leads to our kitchen.

Yesterday at the airport, I was constantly looking for all of those gypsies I had been constantly warned about, and of course I didn’t see any at all! The airport atmosphere was very safe. Customs gave us all a very hard time since our course of study is only until April, but our documents say it is until June. We were met at the airport by a lady that showed us how to catch a coach to Cardiff. After arriving in Cardiff, we walked from the bus stop to the train station. From what little I saw of Cardiff, I think it will be very fun to visit and wander around down there. Everywhere we go people can’t understand us and they use words we don’t understand either. After several jokes made at our expense, the people here are beyond friendly and helpful. I have never had so many people offer to carry my bags and offer to show us where to go. People here go out of their way to help you, something very foreign to Americans!

(Castle on our way to the Treforest stop)

After climbing a mountain to get to the accommodations office, we were shown our rooms and could finally relax. Kait and I went into the Treforest village to buy shampoo, conditioner, water, bread, and soap for our rooms. The village is very cute and we passed a lot of small shops and restaurants. After stopping to get Chinese “Take Away” we walked over the bridge that crosses the railway and hiked back up to our rooms.

(The view from our Flat)

Everything has been very exciting so far, tomorrow we plan to go back to Cardiff to visit and to explore. We choose our classes on Monday and hopefully can start planning for all of our trips after that!